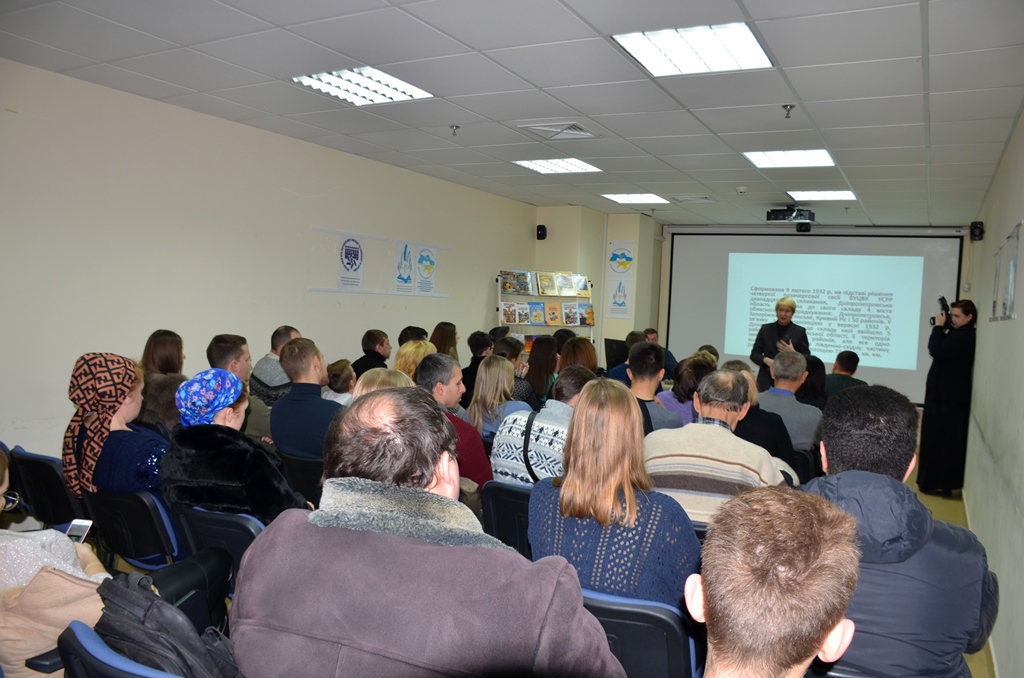 On November 24, within the frameworks of Dniprovsky Historical Club “Tkuma” Institute held a public lecture dedicated to the Holodomor Remembrance Day. The lecture on “The Holodomor in the 1932–33: silence mechanisms” was held by Prof. Nataliia Romanets, Ph. D., –specialist of the Holodomor and Stalinist repression history, professor of the History of Ukraine and Law department of Kryvyi Rih State Pedagogical University. Valentyn Rybalka, “Tkuma” Institute researcher was the moderator of the event.

Using unique archival materials, the researcher described the scale of the Holodomor in the 1932-33 in Ukraine (special attention was paid to the Dnipropetrovsk region), she disclosed the silence mechanisms of the genocide by Soviet power. The professor told how Soviet documents in order to cover up the genocide had provided information about the Famine of the 1930s: for examole, some documents says about “food difficulties in individual villages and collective farms”, that have arisen “as a result of the wreckage in the agriculture of Ukraine, the activities of counter-revolutionary anti-Soviet and kulak elements that penetrated the collective farms”.

During the lecture, the peasant resistance to the Soviet policy of collectivization, the first attempts to memorialize the Holodomor in independent Ukraine, and how to present information about this terrible page of our history to modern youth were discussed. A number of important and sensitive questions were also discussed:

- how Raphael Lemkin came to understand the phenomenon “genocide” on the examples of the Armenian tragedy of 1915, the Holodomor and the Holocaust, and how the definition of genocide remained in the well-known UN Declaration;

- why the Stalinist regime organized the Holodomor, first of all, against the Ukrainian peasantry;

- what were the victims of the Holodomor in the cities of Ukraine and etc.

“Of course, it was impossible to give comprehensive answers to all these and other questions, – mentioned Dr. Igor Shchupak. - However, the most important thing is that the members of our historical club have pondered the many difficult questions of history that continue to bear down on us today.”.

Video of the lecture and discussion will soon be available on “Tkuma” Institute YouTube channel.