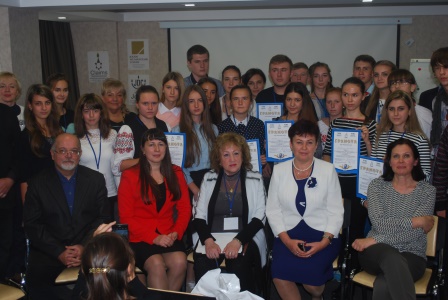 On September 23-25, 2016 Kyiv hosted final events of the 13th International Creative Works Contest “Lessons of War and Holocaust – Lessons of Tolerance”. It is permanent project of “Tkuma” Ukrainian Institute for Holocaust Studies. This year the Contest was dedicated to the 75th anniversary of Babyn Yar tragedy and was conducted simultaneously with series of large-scale events organized by UJE, “Tkuma” Institute, the Holocaust Museum, other leading educational and research institutions of Ukraine.

Participants from almost all regions of Ukraine, including Luhansk and Crimea, as well as from Belarus had sent their projects. 24 history, Ukrainian language, literature teachers as well as 29 school students became this year’s finalists.

Here are the winners according to the defense of the projects:

Yuriy Burdynsky (Vinnytsya region) – “Babyn Yar in the Memories of Those Who Survived”; Natalya Herasym (Chernivtsi) – “The Use of Video Evidence in History Teaching at Schools”; Svitlana Posmitna (Poltava) – “Babyn Yar: Without the Right for Oblivion”; Liliya Voloniuk (Ternopil region) – “Search History Web Quest “The Tragic Fate of the Jewish People. The Scope and Consequences of the Holocaust on the Territory of Lanivtsi district”; Lyubov Tyahlo (Dnipro) – “Professional Ethics of Physician (in the example of medical staff during the Second World War)”; Natalya Diordiyeva (Zaporizhzhya) – methodical development of lesson within course “Person and World”.

Mykola Ilashchuk (11 grade, Chernivtsi) – “The Life of Jewish children in Chernivtsi During the Holocaust Through the Testimony of Eyewitnesses”; Yuliya Pavlova (11 grade, Poltava) – “Declaration of the Stockholm Forum (2005): European Experience in Preserving the Memory of the Holocaust”.