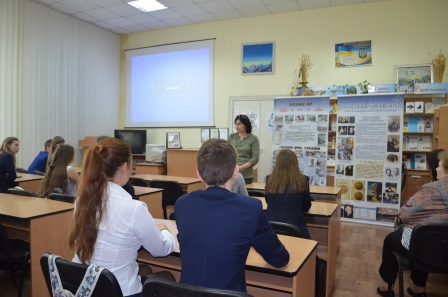 On April 18, 2016 Mykolayiv hosted mobile educational exhibitions organizedby “Tkuma”  Ukrainian Institute for Holocaust Studies and Museum “Jewish Memory and Holocaust in Ukraine”.  Dilfuza Hlushchenko and Iryna Piskariova presented mobile banners dedicated to the Righteous Among the Nations, Babyn Yar and places of mass extermination of Jews in Ukraine during the Holocaust to pupils of the 10th form of the First Ukrainian Gymnasium.

The topic of the exhibition is especially topical as this yeas we mark the 75th anniversary of the killings in Babyn Yar, where in September 1941 more than 33 000 Jews were killed just during two days.

On April 19, “Tkuma” Institute staff presented exhibitions to the pupils of the 10th – 11th forms of Humanitarian Gymnasium in Nova Odesa. After the presentation pupils also learned about the Holocaust Museum and “Tkuma” Institute programs, they can participate in.