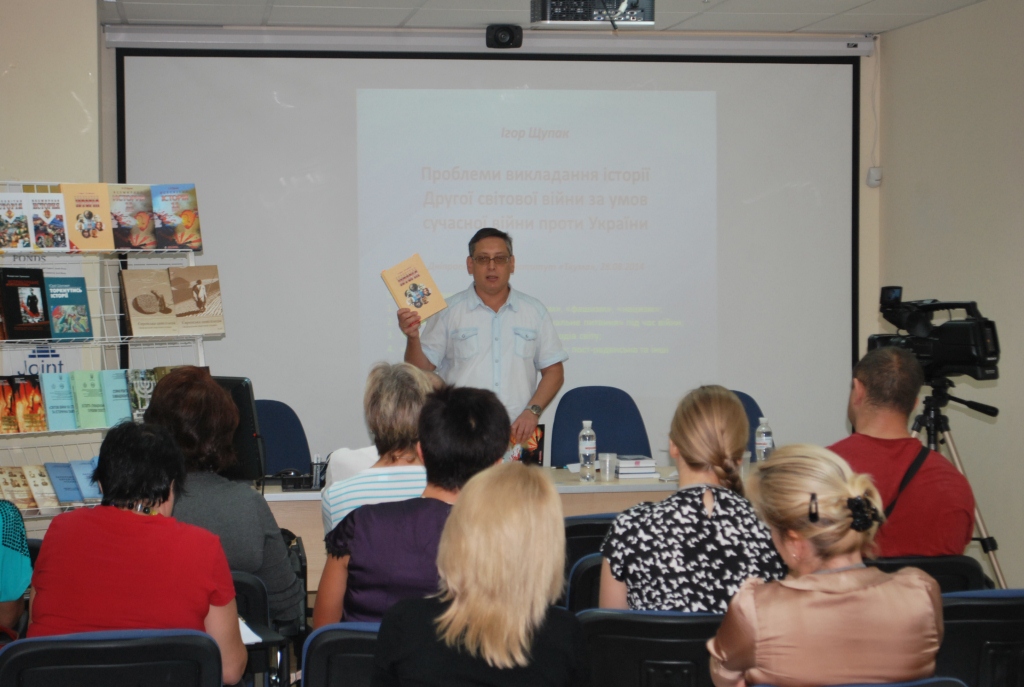 In the course of time our perception of history changes. New facts come to light; myths are being ruined or, otherwise, created. “The only duty we owe to the history is to re-write it”, – these words are ascribed to Oscar Wilde. Not all historians agree with this statement. Perhaps, the idea of the writer is to re-write history in accordance with the current reality and facts. Dr. Georgiy Kasianov, Head of Department of Contemporary History at the National Academy of Sciences of Ukraine, commented on this quite concisely: “Re-writing history takes place due to three causes: ideological conjuncture, qualitative changes in historiography and simply change of opinion of the particular researcher. In the first case it may have formal connection with science, preserving different attributes of scientific research, but actually belongs only to the sphere of ideology and politics. The second and the third ones are movers of the historiography as scientific discipline”.

Currently we are faced with the fourth cause which was not mentioned by Dr. Kasianov – the necessity of getting rid of the history vision, imposed by that ideological conjuncture. During the short reign of Yanukovich & Co we systematically approached to the Russian model of historical memory, which was imposed not only through mass media, but also through education – with the casual help of Minister Tabachnik. In addition we have to resist the propaganda that alters history to its own benefit all the time. Moreover, it has got quite successful results in this sphere – both ordinary “consumers of information” and intellectuals submit to the influence of provocation. Therefore historians, who are able to destroy a deceitful construction of Russian propaganda, became much in demand lately. Unfortunately, professors of history have less authority than journalists who easily replicate pseudo-history to the mass consciousness. One should not forget the Goebbels postulate – “The more improbable the lie is, the more likely that people will believe it”. Thus, to prove the confirmed DPR supporter that Ukrainians are absolutely adequate people is highly improbable. Therefore upbringing and education of rising generation becomes more important and urgent nowadays. “Tkuma” Institute has set a course, first of all, for the work with teachers who in their turn will impart their knowledge and idea to their pupils.

Taking into account the present challenges “Tkuma” Institute together with Yad Vashem supported by the Ministry of Education and Science of Ukraine has initiated a series of seminars “Problems of Teaching the History of World War II in the Conditions of Current War against Ukraine”. First seminar took place on August 28th. History teachers of Dnipropetrovsk schools took part in this seminar. Boris Treigerman, Advisor to the Chairman of the Dnipropetrovsk Regional State Administration, also made his contribution to the organization of the event.

Dr. Igor Shchupak, “Tkuma” Institute Director, author of textbooks of history and pedagogue with many years of experience, comments on the necessity of the project: “My colleagues historians – researchers, teachers – lively discuss how to teach the topic of World War II, which opens a course of history in 11th grade, in conditions of the war which currently takes place in our country”. It is obvious that this very topic is the most politicized and ideologized: such a topic was used to cause a split in Ukrainian society, the consequences of which can be currently observed in Donbas area. I consider important, first of all, to call things by their proper names – in the course of history and nowadays: “fascism”, “Nazism”, “totalitarianism”, “democracy”. It’s important to define these notions. There are numerous speculations concerning “banderivtsy” and nationalism, so we are touching the issue of Ukrainian nationalism and “national issue” during the wartime. It’s important to analyze myths and stereotypes regarding the Holocaust and its universal lessons for mankind (taking into account that it didn’t learn these lessons well). Finally, as it was truly said by Yaroslav Hrytsak, there is “Memory of the war and the war of memories”, including – post soviet, central European and others: and what memory is being formed in modern Ukraine?” These became the key-issues of the seminar which took place in the form of dialogue with the participants.

Dr. Igor Shchupak points out that Ukrainians in the East and West of the country, undoubtedly, have different historical memory; nevertheless it should not interfere with the raising of the indivisible state at present. And the reconciliation consists not in forgetting or ignoring of the controversial historical events, but in admission of personal faults, forgiving others their mistakes and recognition of each other’s right to have their own heroes. Thus, although Stepan Bandera, whose name is used very often to start up a fight, is not a hero for the residents of Eastern regions but we must recognize the right of the residents of Western regions to worship him as their hero. It is absurd to brand everyone, not only nationalists, but patriots as “banderivetz”. From the other hand when the right to have personal heroes is given, “banderivetz” would lose its negative connotation. The same situation is with the word “fascist” which now is used to brand every Ukrainian and the meaning of which is absolutely different from what Russian propaganda tries to put into it.

Dr. Igor Shchupak considers work with basic meanings (otherwise we will not be able to understand each other and will create the ground for the meaning substitution and falsification) and scientific analysis of historical events and phenomena as the universal approach to the study of World War II history, thus pupils should come to conclusion by themselves. What is “fascism” and “Nazism”? What do fascist ideas and criminal practice stand for in the modern world?

What is the “Patriotic War”? What are its features or could they be observed at the territory of modern Ukraine during World War II?

It is not the obtrusion of the ideas or propaganda but a scientific analysis is the only way to bring up conscious citizens and protect them from the propaganda influence.At the end of the seminar Dr. Igor Shchupak said: “It is impossible to cover the claimed issues in full for two hours. Nevertheless we hope that we’ll manage to outline the main directions of thinking and understanding the past events, which came to present as a horrible echo”.The importance of such seminars for teachers was well illustrated by one of the participants of the seminar by quoting Otto von Bismarck: “The battle of Sadovaya had been won by Prussian school teacher”. So we pin hopes on our Ukrainian teachers.