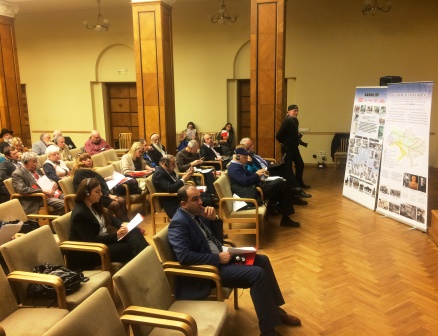 The conference was opened by the welcoming speeches of Rabbi Dr. Menahem Barkahan and Dr Karlis Shadurskis, Minister of Education and Science.

The conference presentations were made during special sessions entitled: “Holocaust Teaching”, “Collaborators”, “The Modern Aspects of Discrimination and Aggressive Nationalism in Europe”, “Armenian Genocide as Ancestor of the Holocaust”, “Memorialization of the Holocaust”.

Within the session dedicated to the Holocaust teaching, “Tkuma” Institute and the Holocaust Museum Research Associates presented mobile exhibition banners on the Holocaust in Ukraine, Babyn Yar, the problem of collaboration during World War II, heroism of Righteous among the Nations, the Armenian Genocide in the Ottoman Empire in 1915.

Unique photos and documents from Museum “Jewish Memory and Holocaust in Ukraine” and leading international institutions used to create mobile banners as well as interesting form of presentation drew attention of the audience. During the conference, contacts with European scientists and educators were established and forms of future cooperation were discussed.