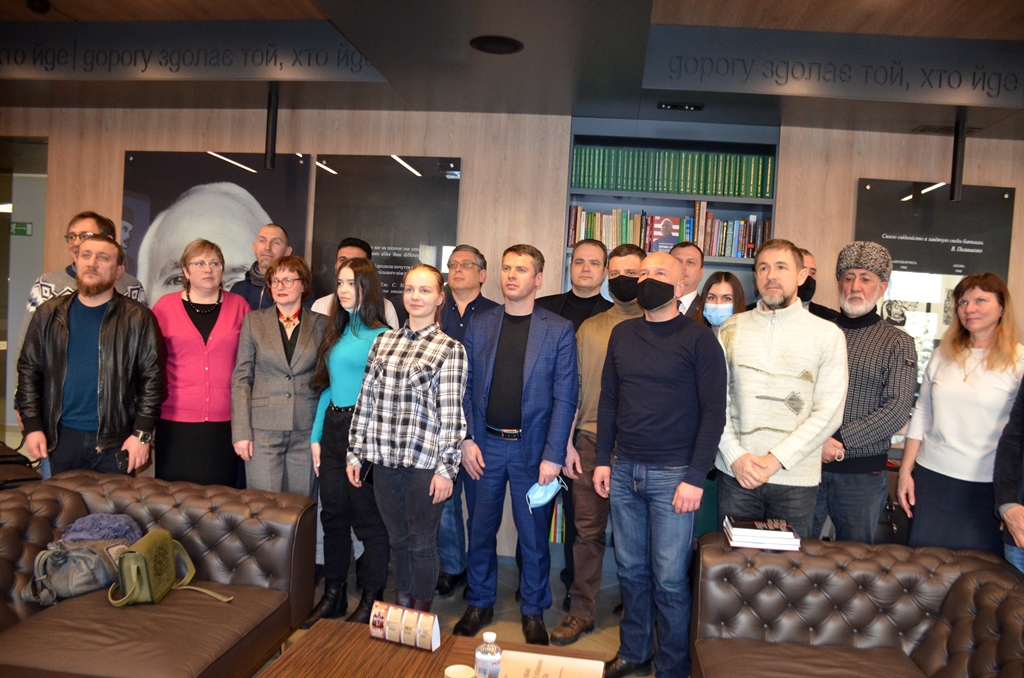 On February 23, Ukraine and Dnipro commemorates the tragic death of the leader of the Crimean Tatar people, the first Prime Minister of the Crimean Democratic Republic Noman Çelebicihan (1918) and the memory of the victims of the Soviet deportation of the Vainakh people (1944). It was on this day in 1944, that Operation NKVD launched Operation “Chechevitsa”, during which approximately 600,000 Chechens and Ingush were deported to Central Asia and Kazakhstan.

During the event, we presented a mobile exhibition of “Tkuma” Institute, which is dedicated to the deportations of the Crimean Tatar and Vainakh people. By the way, it was created a few years ago, when we were approached by Ukrainian volunteers Amin Okuyev (who, unfortunately, was killed in 2017) and Adam Osmayev, who proposed to create an information banner about the tragedy of the Chechen people.

The event was moderated by a longtime friend and partner of our Museum and “Tkuma” Institute, Dr. Svitlana Kayuk (Oles Honchar Dnipro National University); Ihor Kocherhin, the head of the South-Eastern Territorial Department of the Ukrainian Institute of National Memory; Ramazan Kurbanov, the head of the Dnipro Muslim community, and the head of the Library of the Ukrainian Diaspora named after Senator John McCain, Vitaly Kucherenko, head of the NGO "Fellowship of the Crimean Tatars" in Dnipro; Kemal Mustafayev, representative of the "Fellowship of the Crimean Tatars" in Dnipro; Dilyaver Abdullayev, advisor to the mayor of Dnipro, representative of the Jewish community, Oleh Rostovtsev, head of culture and tourism , nationalities and religions of Dnipropetrovsk Regional State Administration Svitlana Svitlichna, representative of the Chechen community in Dnipro Arbi Tushayev, head of the culture department of the humanitarian policy department of Dnipropetrovsk City Council Yevhen Khoroshilov, director of “Tkuma” Institute and Museum “Jewish Memory and Holocaust in Dnipro” Igor Shchupak, head of the ATO Museum in Dnipro Vadym Yakushenko.

We remember the terrible events of the deportation of Chechens and Ingush, Crimean Tatars and other peoples of Crimea, the Holocaust, the Holodomor and other genocides. After all, there’s no other peoples’ pain.