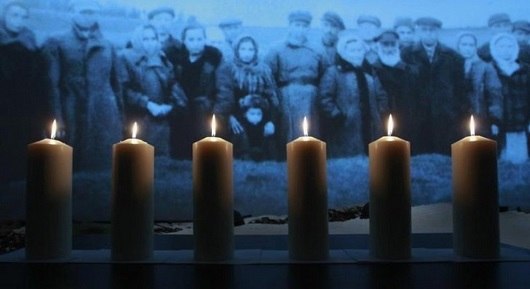 This Day was a worldwide vital need to commemorate millions of perished Jews killed by Nazis. As soon as Israel became an independent country a debate ensued as to what date was appropriate to perpetuate the memory of the Catastrophe. Different point of views were expressed, this question was the reason of political debates and discussions: Ben-Gurion, ex-Prime Minister of Israel, considered it necessary to held Remembrance Day before the uprising in the Warsaw Ghetto. However, the date of the uprising, the 14th day of the month of Nisan - the eve of Passover, is not suitable for national mourning. Ben-Gurion named this day Yom Hazikaron laShoah ve-laG'vurah (“Holocaust and Heroism Remembrance Day”). Menachem Begin, the leader of the opposition party, considered the most appropriate the day of Tisha B'Av (“the ninth of Av”) - the day of national tragedy, when the First and Second Temples were destroyed.

In 1951, the Knesset began deliberations to choose a date for the Holocaust Remembrance Day. On April 12, 1951, after also considering as possibilities the Tenth of Tevet, the 14th of Nisan, which is the day before Passover and the day on which the Warsaw Ghetto uprising (April 19, 1943) began, and September 1, the date on which the World War II began, the Knesset passed a resolution establishing the 27 Nisan in the Hebrew calendar, a week after Passover, and eight days before Israel Independence Day as the annual Holocaust and Ghetto Uprising Remembrance Day.

During Yom HaShoah all entertainment events are canceled and memorial ceremonies are held everywhere. The main one is held at the Yad Vashem Holocaust Memorial Center and is broadcasted live. It begins in the evening of the previous day and lasts all the next day. The ceremony is attended by heads of state, high-ranking officials from other countries, people who survived the Holocaust. During the ceremony, six of the lucky Holocaust survivors lit torches in memory of the six million exterminated Jews. The next morning, the ceremony at Yad Vashem continues: a two-minute siren sounds, which can be heard all over the country. As soon as the siren sounds, Israel is in a silent contemplation. Businesses stop, people freeze in the streets, drivers park cars on roadsides - everyone remembers Jews - victims of the Holocaust. After the signal, the first persons of the state, representatives of public associations lay wreaths on the Warsaw Ghetto Square at Yad Vashem. Millions of Jews living in Israel and abroad recite the funeral prayer on this day.